Sand casting offers the greatest possible freedom of design – from the development of the components to manufacturing closed profiles.

The gentle sand casting method enables even and consistent filling of the mould, which makes processing at a later stage feasible without any problems.

Sand casting allows projects to be realised rapidly. Any possible changes during the development can also be addressed flexibly.

Every 50 seconds, a mould is opened and a finished component sees the light of day. Interlinked automated processes enable rapid and highly flexible manufacturing. 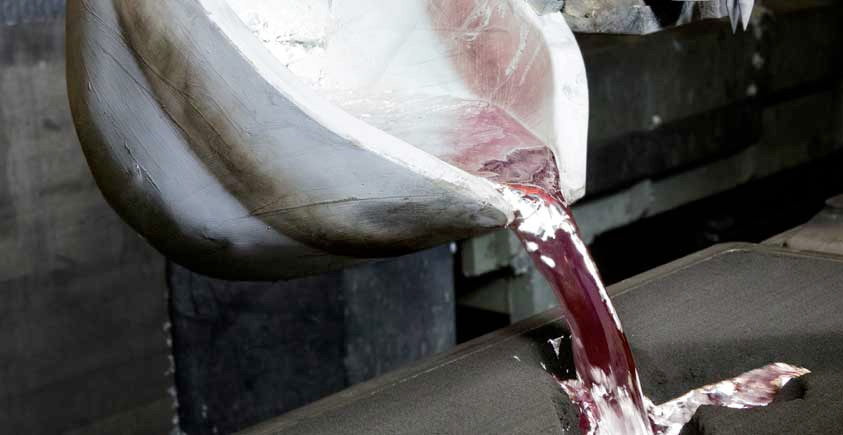 The advantages of the
Sand casting process in detail

High pressure from all sides? We give you the freedom to develop.

Rigid tooling, rigid sliders. The limitation in design in high-pressure die casting does not come as a surprise. That is why in general only open profiles can be produced, which may yield towards the open side under stress.

In sand casting in contrast, sand cores can be used to create undercuts, which allows maximum freedom of design in the development of components and the production of highly rigid closed profiles.

300 to 1,000 bar. This enormous force is applied to press the aluminium material in high-pressure die casting, nearly tearing up the material. This is not without consequence. If, for example, profiles have to be joined by welding, the air included in the form of blisters causes significant problems.

The gentle sand casting method convinces with even filling of the mould with very low turbulence. Cooling can be adequately controlled. Processing through welding at a later stage is possible without any problem.

Pressure slows you down. We step up the pace.

Ordering steel, building tools, incorporating possible changes, producing: when manufacturing components in high-pressure die casting, up to 40 weeks may pass between the order and the delivery. This is, amongst other things, due to the complex production of large and heavy steel tools.

Thanks to the model devices made of high-performance plastics used in sand casting, it generally only takes 12 weeks in series production from making the tools to delivering the components. In this process, possible changes during the development of the components can be addressed flexibly.

The time savings start in the prototype development phase already. As prototypes are nearly exclusively produced by sand casting, the results can be transferred to later series production nearly unchanged. If, however, components then have to be produced in high-pressure die casting, further tests are necessary because a new production method has been chosen.

Our definition of efficiency: Highest performance without any pressure.

The cycle times tend to be significantly longer in high-pressure die casting as a lot of time is required for the long solidifying process. The costs for tooling are also significantly higher. Steel is expensive. In addition, frequently occurring cracks in the tools resulting from alternating thermal stress cause frequent and cost-intensive changes of tools. The plastic models used in sand casting may be used up to 60,000 times, depending on their design. And even after that, maintenance is still possible. In addition, model modifications such as the facelift of a component can be carried out without any problem.